Free webinar:  But you must register (http://bit.ly/2NDEQJ7) to receive your unique login.

Able to attend in person?    Light snacks and Social hour start at 6PM.

The One Health Academy meets at the AMERICAN SOCIETY OF MICROBIOLOGY at 1752 N St NW, Washington, DC every second Wednesday, September – June. There is a 50 person space limit, so please RSVP to attend in person by Tuesday, January 8. In Person cost is $10 ($5 for students). 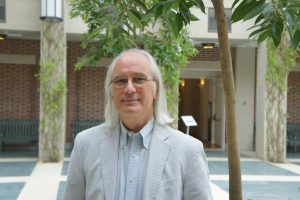 In this position Dr. Carroll is responsible for providing strategic and operational leadership for the agency’s programs addressing new and emerging disease threats. Dr. Carroll also serves as USAID’s special representative for global health security. Dr. Carroll was initially detailed to USAID from the U.S. Centers for Disease Control and Prevention (CDC) as a senior public health advisor in 1991.

In 1995 he was named the agency’s senior infectious diseases advisor, responsible for overseeing the agency’s programs in malaria, tuberculosis, antimicrobial resistance, disease surveillance, as well as neglected and emerging infectious diseases. In this capacity Dr. Carroll was directly involved in the development and introduction of a range of new technologies for disease prevention and control, including: community-based delivery of treatment of onchocerciasis, rapid diagnostics for malaria, new treatment therapies for drug-resistant malaria, intermittent therapy for pregnant women, and “long-lasting” insecticide treated bed nets for prevention of malaria. He was responsible for the initial design and development of the President’s Malaria Initiative. Dr. Carroll officially left CDC and joined USAID in 2005 when he assumed responsibility for leading the USAID response to the spread of avian influenza.

Dr. Carroll has a doctorate in biomedical research with a special focus in tropical infectious diseases from the University of Massachusetts at Amherst. He was a research scientist at Cold Spring Harbor Laboratory where he studied the molecular mechanics of viral infection. Dr. Carroll has received awards from both CDC and USAID, including the 2006 USAID Science and Technology Award for his work on malaria and avian influenza, and the 2008 Administrator’s Management Innovation Award for his management of the agency’s Avian and Pandemic Influenza program.

Thank you to the One Health Commission for making it possible to share this discussion with a wider audience via webinar.